Back then, the project had reached an impasse for the investor/ owner, when the City Planning Commission of Munich shot down construction viability, i.e. fulfilling the requirements, with their 10 point checklist.
The City Planning Commission had pointed out a series of flaws, which included: neglected eaves and overall heights and limits, the huge window-less surface area of the facade along Schlosserstrasse, the mall being too narrow, the lack of a prominent, generous entrance to the mall, insufficient areas for movement and communication and the lack of clear visibility of the cinema from the outside. Subsequently, Bernd Eichinger‘s company, Constantin Film, came on board to work on the project. In early March 1997, they commissioned us with the cinema design of the Mathaeser Cinema. Following the success in Cologne, this was to become the second Cinedom multiplex cinema. Constantin Film did not just act as the cinema operator; they also became the principal tenant of the entire building block.

Upon an initial viewing of the existing pre-construction plans it became clear that there were significant deficiencies in terms of projection (too steep and thus distorted), acoustics (not considered), and accessibility (not ensured), escape routes (trip hazards in hallways and doors), seating configurations (insufficient floor space requirement) and e.g. vestibules (non-existent). Together with the CEO of Constantin Film, Thomas Peter Friedl, we developed a completely revised design on the part of the landlord, which went far beyond the scope of the original cinema area. Our client, Constantin Film, provided us with excellent support and entrusted us with this endeavour. Back then, when our company was just starting out, this gave us the opportunity to demonstrate how to approach cinema design from the inside out and how proper coordination with the outside makes it possible to find outstanding solutions.

Other aspects that contributed to the project included our love of “tinkering” and working meticulously, a high degree of inventiveness and innovation and our extensive and broad knowledge and experience beyond pure architecture and interior design.

First, each auditorium was individually optimized according to length, width and height in terms of the number of seats. Accordingly, “boxes” varying in size were developed, which now had to be expediently arranged in the building space. The following criteria had to be met in this context: 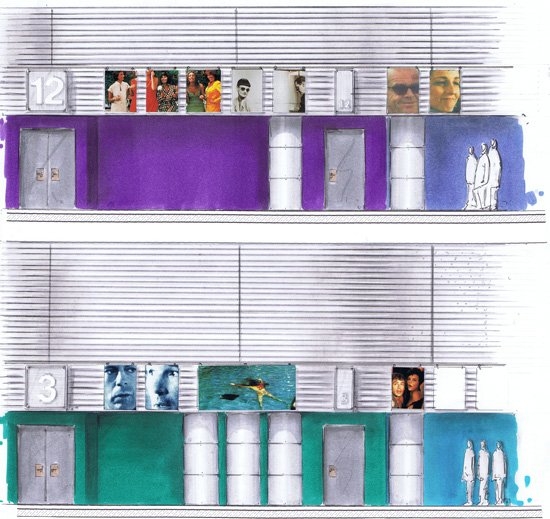 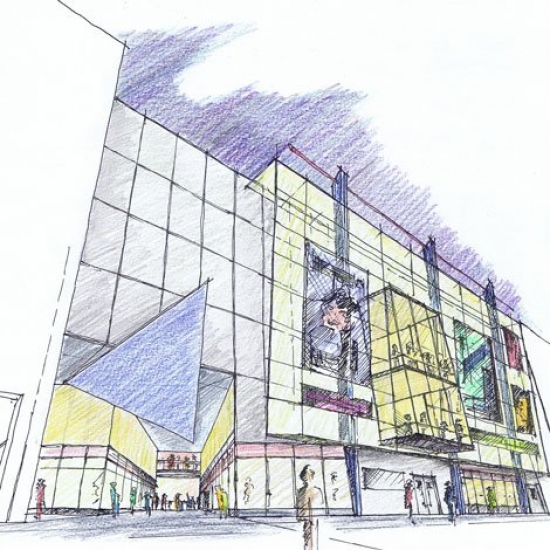 It was therefore important to optimally assemble a series of requirements, similar to completing a puzzle. It involved the integration of financial, functional, technological, legislative, regulatory, user-specific and design-related aspects within the overall design. The spaces were to provide sufficient room for what they were to contain (a microcosm of people and furniture in the macrocosm of space) with an efficient layout.

Although at the time KPB had been commissioned only with the cinema design of the 14 auditoriums with ancillary areas, we were able to significantly optimize the entire building complex, including all of the other rental areas. Two levels were removed (reducing construction costs and construction periods), each of the ten requirements specified by the City Planning Commission was fulfilled (thereby making the permit possible), the building services technology was simplified (resulting in tremendous cost-savings and simplifying fire protection) and each auditorium was realized in ideal proportions with a fourth wall respectively as the projection screen.

Today, the Mathaeser still is the cinema for Premieres, not just in Munich, but actually in all of Southern Germany. With around two million patrons a year, it has been Germany’s most successful cinema for many years.