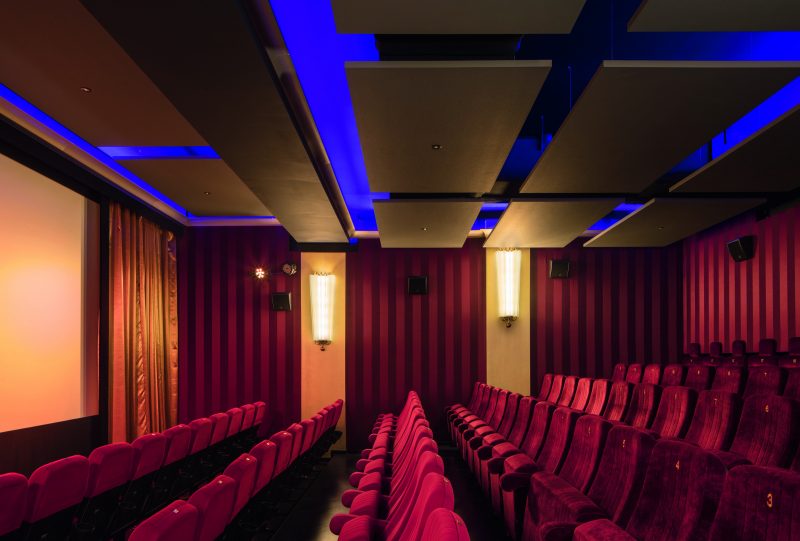 Fig.: In 2016, the “Neues Rex” Cinema located in a heritage-protected property, was newly renovated. In the red auditorium with 100 seats, glowing red LED profile lighting visually marks the steps. Above the new acoustic ceiling components an interplay of colours can be generated with RGBW LED.

She has done it again! In 2016, Anne Batisweiler, Interior Designer & Cinema Designer, re-designed the “Neues Rex” Cinema in Munich-Laim. One auditorium was turned into two and although the old brass lighting fixtures were used, the cinema now shines with new LED technology. 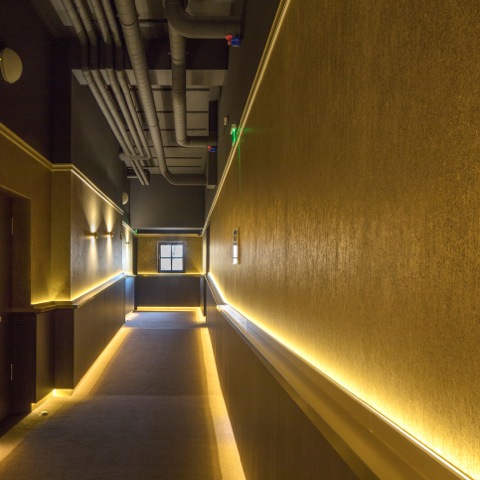 Fig.: Dynamic lines of lighting guide patrons into the auditoriums. The hallway is illuminated by natural white, indirect LED lighting. Brass anodized wall luminaires provide additional accent lighting. In addition to acoustic background noise, this “passageway” provides an opportunity for patrons to gradually adjust their eyes to the darker lighting conditions in the auditorium.

The cinema market is extremely competitive. Operators need many innovative ideas to score with the audience. So, Thomas Wilhelm, the owner of “Neues Rex” Cinema in Munich-Laim, turned to renowned Cinema Designer, Anne Batisweiler, to keep up with the frontrunners. The former single screen cinema was to be turned into two smaller auditoriums, offering twice as many film. 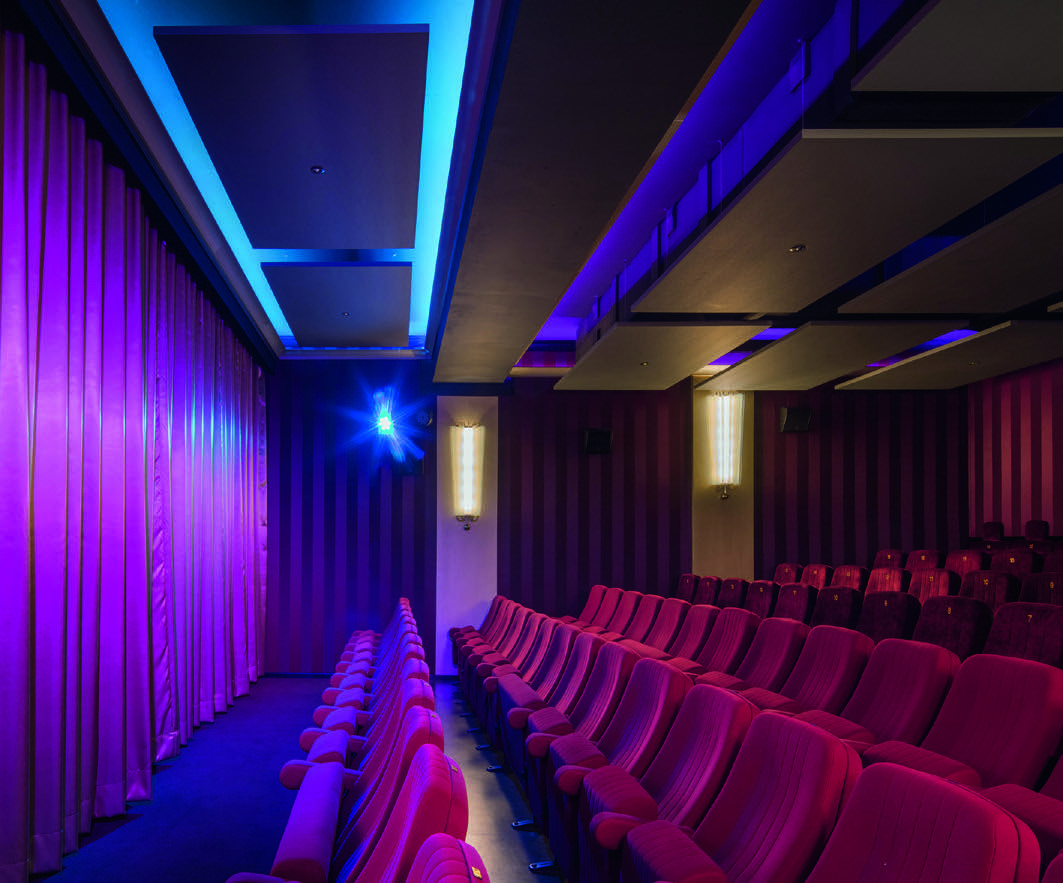 Fig. above: As an interplay with the spotlights, a variety of coloured lighting scenarios were composed and programmed that are utilized for different cinematic themes – such as the „Barbie“ mood lighting here. 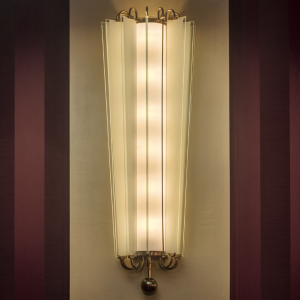 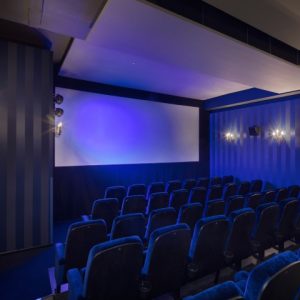 Fig. below: In the blue auditorium with about 70 seats the already existing brass lighting fixtures were fitted with new LED filament lights.

The “Neues Rex” Cinema is located on the first floor of a heritage-protected property above a traditional Bavarian gastro-pub with beer garden in summer.

Without an elevator but a long staircase case leading up to the cinema, Thomas Wilhelm is betting that his patrons are real fans of traditional cinema. It was important to him that the large (i.e. larger) auditorium continues to shine in the colour red, and that the classic brass cinema lights be utilized again.

To ensure good movie theatre proportions, the additional smaller blue auditorium was rotated by 90° and arranged towards the shortened larger auditorium. This allowed made it possible to use the existing passages from the hallway, as well as the existing projection room for one auditorium, without substantially interfering with the building structure.

Thomas Wilhelm largely designed the revamped foyer himself, together with a counter manufacturer; but for colour and lighting design he relied on the Cinema and Lighting Designer from Munich.

For the experienced Cinema Designer Anne Batisweiler, who routinely works in this field, each new cinema design project still presents its own unique challenges. Besides the “Neues Rex” Cinema, she was responsible for the design of many other movie theatres such as the Gloria Palast, Gabriel-Lichtspiele Cinemas, the Royal, the foyers of the Museums-Lichtspiele Cinemas and CinemaxX, parts of the City Kino Cinema and, among others, the overall design concept of the Mathaeser in Munich.

The furnishing materials as well as the wall colours point to what is to come along the hallway leading into the auditoriums. The cleaned, polished and newly fitted brass wall were refurbished with filament illuminants (E27 socket), of course in a festive warm tone of 3,000 kelvins. These are also found in the red auditorium. The indirect cove lighting in the back-foyer area is repeated in auditorium 1. The perimeter lighting elements, painted in gold, cover the natural white LED lines as well as the RGB LED, which can not only be colour-controlled but also dimmed. The young team from the lighting company NUVOLIGHT from Fuerstenfeldbruck was responsible for the technical implementation.

Fig.: Two for one: To create good movie theatre proportions, the additional smaller blue auditorium was rotated by 90° and arranged towards the shortened larger auditorium.

Patrons are pleasantly surprised by the warm brown and gold tones along the hallway, even before entering the auditoriums from the foyer. Gold-speckled wallpaper reflects the light from the indirectly arranged natural white LED profiles in the upper wall area. The contours of light at parapet height and along the base of the dark-brown wood panelling seem like dynamic rays of light along the entire length. Since the walkway along a ramp is structured to compensate for height between the two auditoriums, the dynamic effect is further heightened. Along the way to the auditoriums, brass-coloured anodized wall lights by SLV provide additional accent lighting. This hallway serves as an important gateway between the foyer and the auditoriums: It reduces the acoustic background noises between the various areas of use and helps patrons to gradually adjust their eyes to the darker light conditions in the auditorium, as they make their way there. The same applies in reverse after the film when leaving the auditorium.

FROM BARBIE TO HALLOWEEN

To improve visibility in the 100-seat red auditorium, a platform system was installed, which now visually marks the steps with glowing red LED step profiles, without reflecting too much light onto the screen. Above the new acoustic ceiling components, an interplay of colours emerges from coved lighting. The lighting components are equipped with RGB as well as natural white LEDs, since a mixed white light hue from the RGB would not feel as warm and festive. For the interplay between the two-by-two spotlights situated on the left and right, illuminating the golden curtain, a variety of lighting colour scenarios were composed and programmed, which can be employed for different cinematic subjects. They bear such sonorous working titles as “Barbie”, “Halloween”, “Red Ballroom” or “Midnight” to describe the lighting mood.

In the blue auditorium with around 70 seats, the smaller, three-armed brass lighting fixtures were given purpose once again. Fitted with filament illuminants, arranged here in a crosscut form with E14 sockets, and in combination with the dark blue fabric-covered walls, the auditorium is somewhat reminiscent of the castle in the Disney movie “Beauty and the Beast.” Of course, the LED-lit step edges on the platforms are a matching blue. Since there is no curtain in the smaller auditorium, a white and a blue spotlight create light effects on the screen. 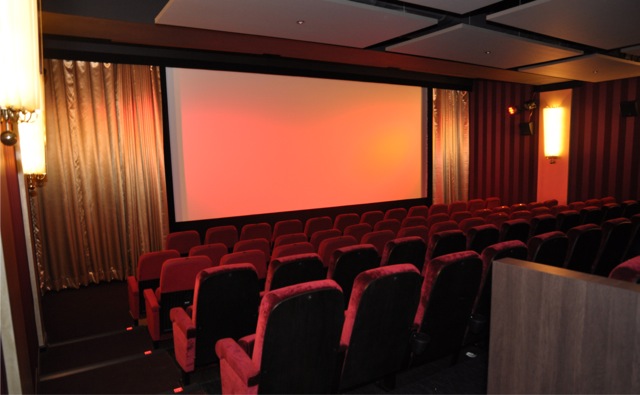 The idea was a total success. Thomas Wilhelm invested in the conversion at the right time. The expanded movie program and the increase in the number of patrons speak for themselves. Lighting Designer Anne Batisweiler is also pleased with the positive feedback from patrons following the redesign. During the LICHTWOCHE Munich Festival of Light 2016 events, following a tour through the cinema and behind the scenes in conjunction with a movie matinée of “Icons of Light” (Lichtgestalten), among other occasions, she received great praise. Talk about a happy end!