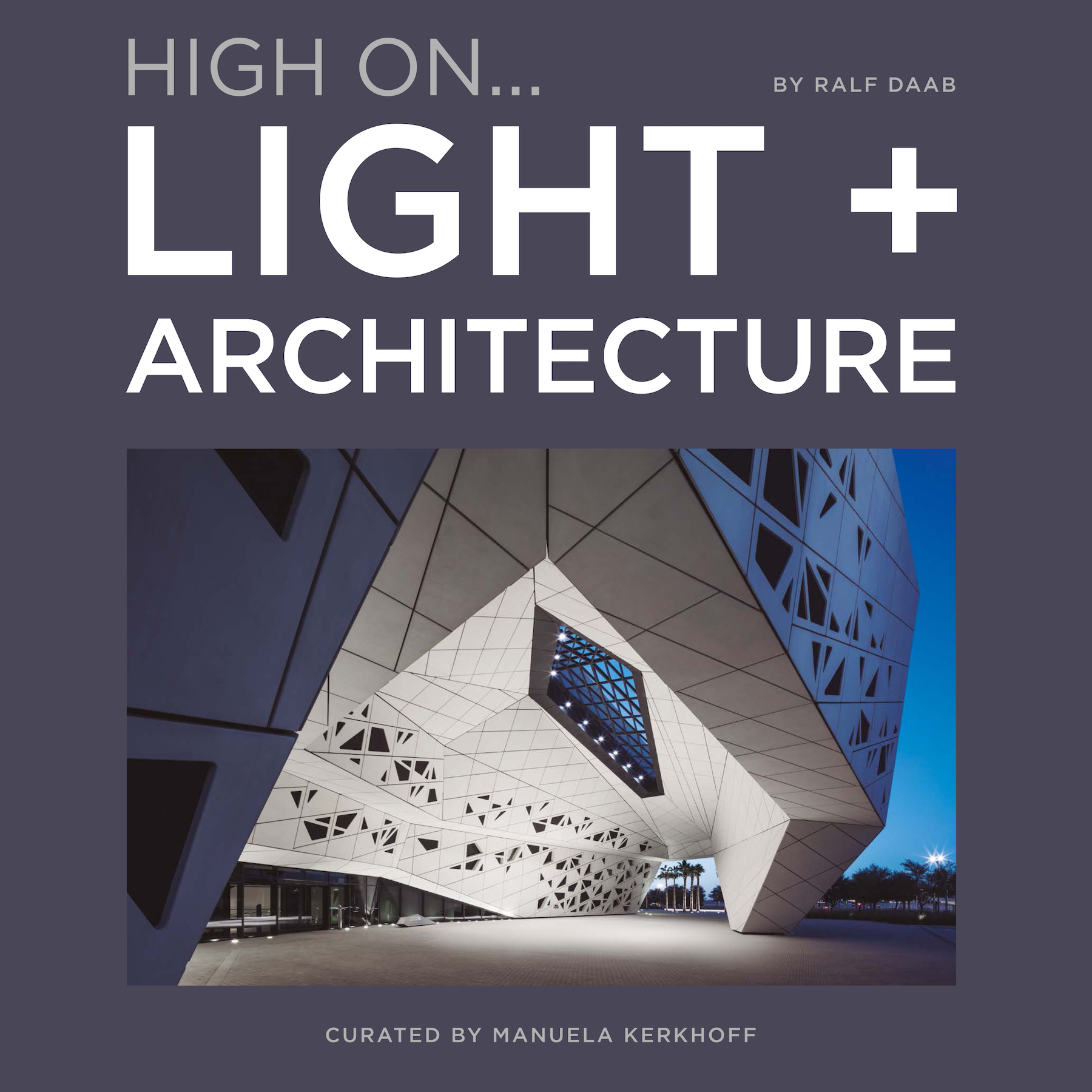 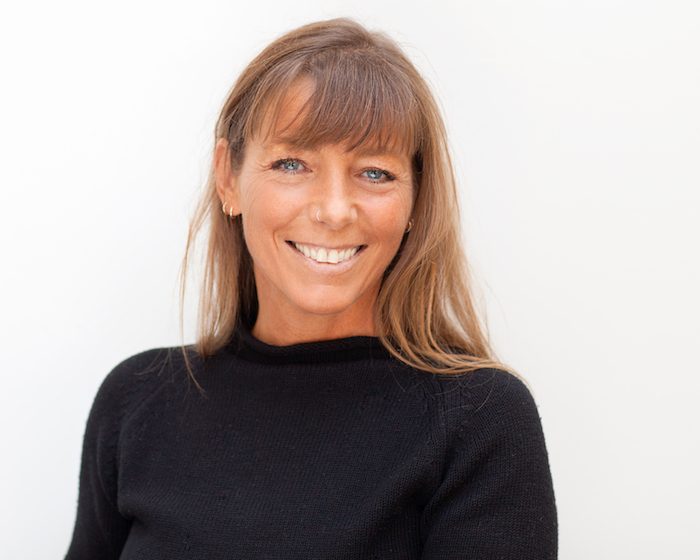 Since the conversion of a movie theater with a foyer some 30 years ago, Kinoplanung Batisweiler has designed hundreds of cinemas throughout Germany and abroad. In addition to knowledge of materials, ergonomics, work processes and marketing in cinema buildings, knowledge of lighting, projection, acoustics is added up, in short, the entire technology of this type of architecture experi­ence. Once the needs and special features of each project have been determined, the functional basics are optimized. Investment and effort are always connected to a significant improvement of the spatial experience, the living and working atmosphere as well as sustainability. Proportion, graphics and colors always play a decisive role. A close connection to scenography and film architecture – the interior architect and designer has supervised and taught students of these disciplines for many years – stands for great freedom of design, because concepts such as “ fiction” or “patina” also flow into it. Anne Batisweiler and her hand­picked team stand for a high level of professionalism and pas­sion for everything to do with film and movie theaters.

Hall No. 1 was Germany’s first Dolby Cinema at the Mathäser in Munich. It was even given its own foyer, appro­priately designed in the striking “Dolby Design” with lots of black and the magical blue light lines. A special design element is the staging of the entrance tunnel with an s­-shaped basic structure. This gives the visitor a surprise effect at the entrance and another when leaving the tun­nel directly into the auditorium. In this lock between the worlds inside and outside, the indirect light lines on the left and right, above and below accompany the cinema visitor. They are the only source of light apart from (introductory) film sequences shown on one of the curved tunnel walls. Leaving the hustle of everyday life behind, the path through the tunnel helps you to engage with the film experience, with its very special swinging vibration. Once there, the hall spreads out at the visitor’s feet in very comfortable arm­ chairs, with plenty of legroom and adjustable backrests or recliners in the first row. 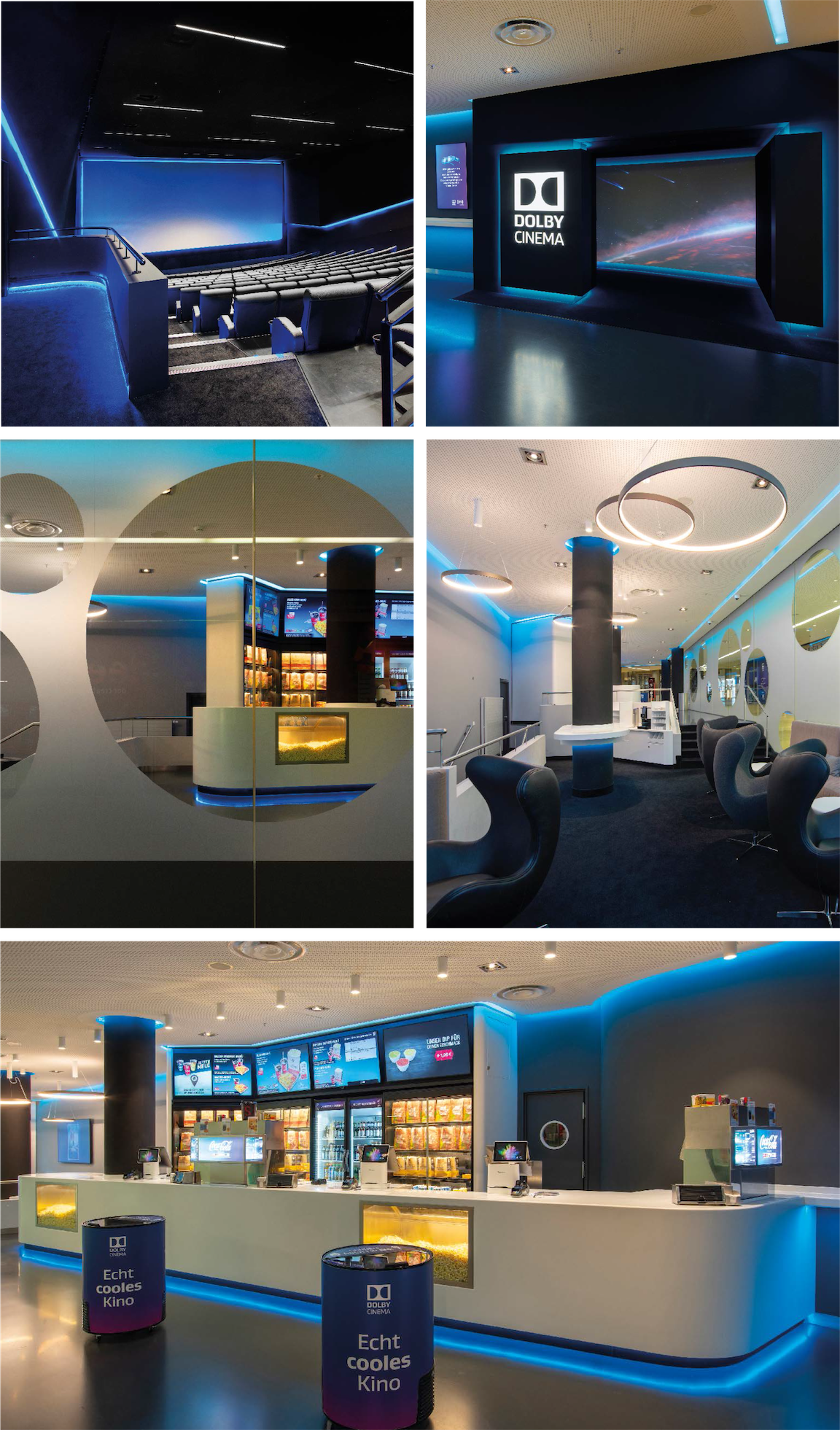 Five halls, “like thrown the dice” in a game, are connected by a foyer whose centre forms an ellipse. This idea was taken up for the interior design by assigning each hall its own color on the side facing the foyer and reiterating it as a line structure on the ceiling towards the centre of the foyer. The result is a grid of indirectly illuminated LED light pro les that overlap from five directions and at regular intervals. Each light line can be controlled separately in RGB and warm white. When an auditorium is ready for admission, both foyer levels and the doorway to the space are illuminated in the respective color. For times between films or during special events, the entire foyer is bathed in one color or changes in an interplay of color compositions and rainbow effect. In the five cinema halls, the design concept of staggered, horizontal lines is repeated, running across the back and side walls and playing in freely selectable colors and scenarios. 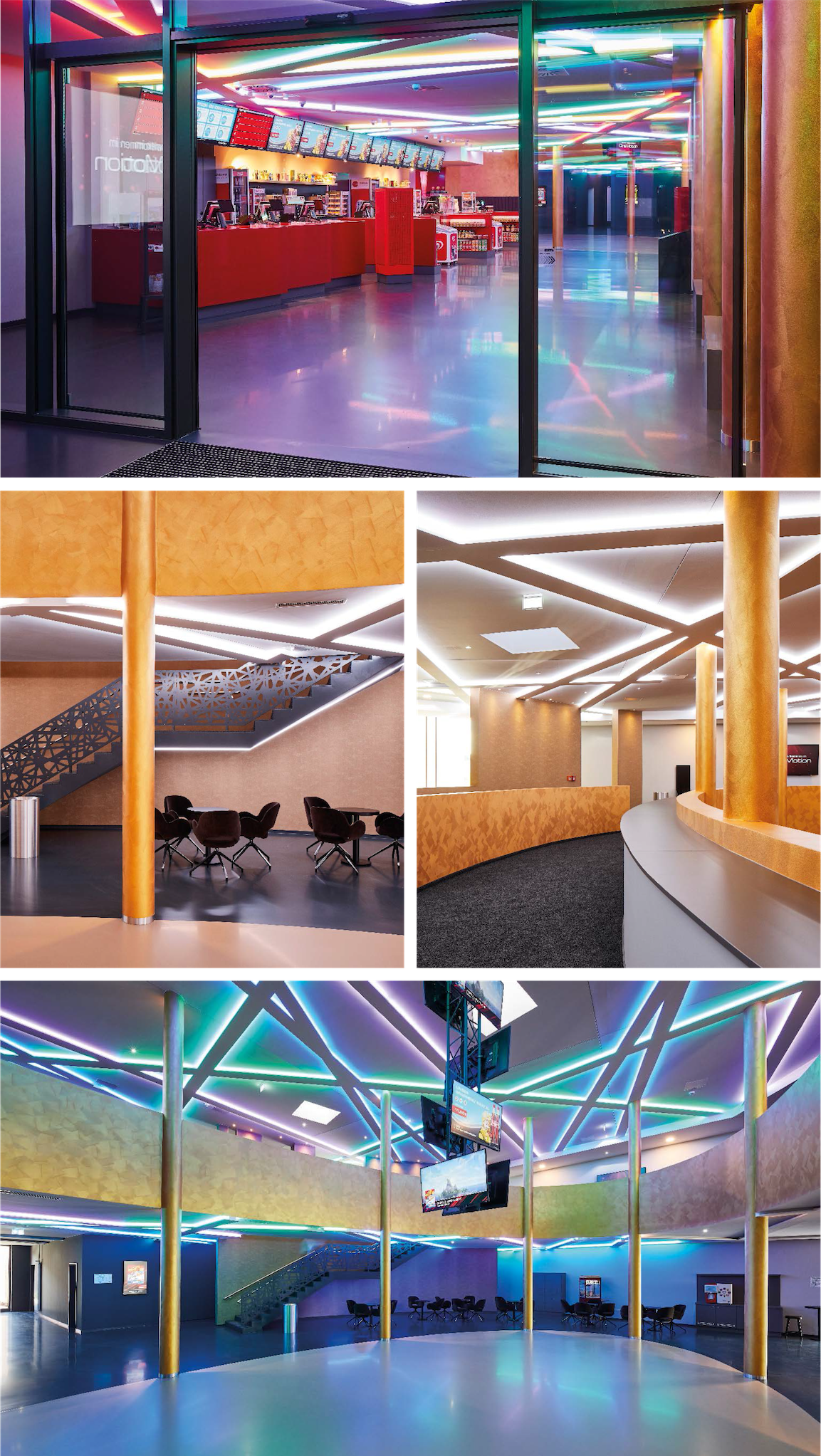 The client’s wish was to have a hall completely structured in a monochrome color scheme, with vertically and horizontally arranged light lines, following the design of the Delphi Lux Berlin (by Batek Architekten). Thus, the ceiling, walls, as well as the plush armchairs, a softly falling curtain and the carpet are bathed in a strong red. The linear structure running along both side walls and the ceiling, with the areas in between, is reminiscent of paint­ ings by the artist Mondrian. All light lines are equipped with RGB and warm white LEDs and can be controlled and switched separately along and across the hall. Particularly exciting are the effects that can be created in the hall by using different light colors. With blue light, the room is completely immersed in blue to black, depending on the intensity. As soon as warm white stage light is switched on, a color gradient from blue­black at the back is created via violet to red in the front rows. And alternatively colored light lines create a rework of colors in the auditorium.

The New Rex Cinema in Munich­-Laim was no longer “new” at all and was in urgent need of a technical and design overhaul in addition to a second auditorium. Apart from the requirement not to lose any seats, the cinema operator wanted the historic look of his cinema to be maintained at all costs with a hall in red. The two existing types of brass chandeliers, newly equipped with LEDs, were to be used again in the auditoriums. To generate good proportions, the smaller blue auditorium was rotated 90° to the short­ ened larger one. In this way, the existing passages from the corridor, as well as the old projection room, are still used for a hall without interfering greatly with the struc­ ture of the historic building. Even before the visitor enters the halls, he is pleasantly surprised by a corridor bathed in warm brown and gold tones coming from the foyer. The light contours at parapet height and in the plinth area have the effect of dynamic rays of light along the entire length. 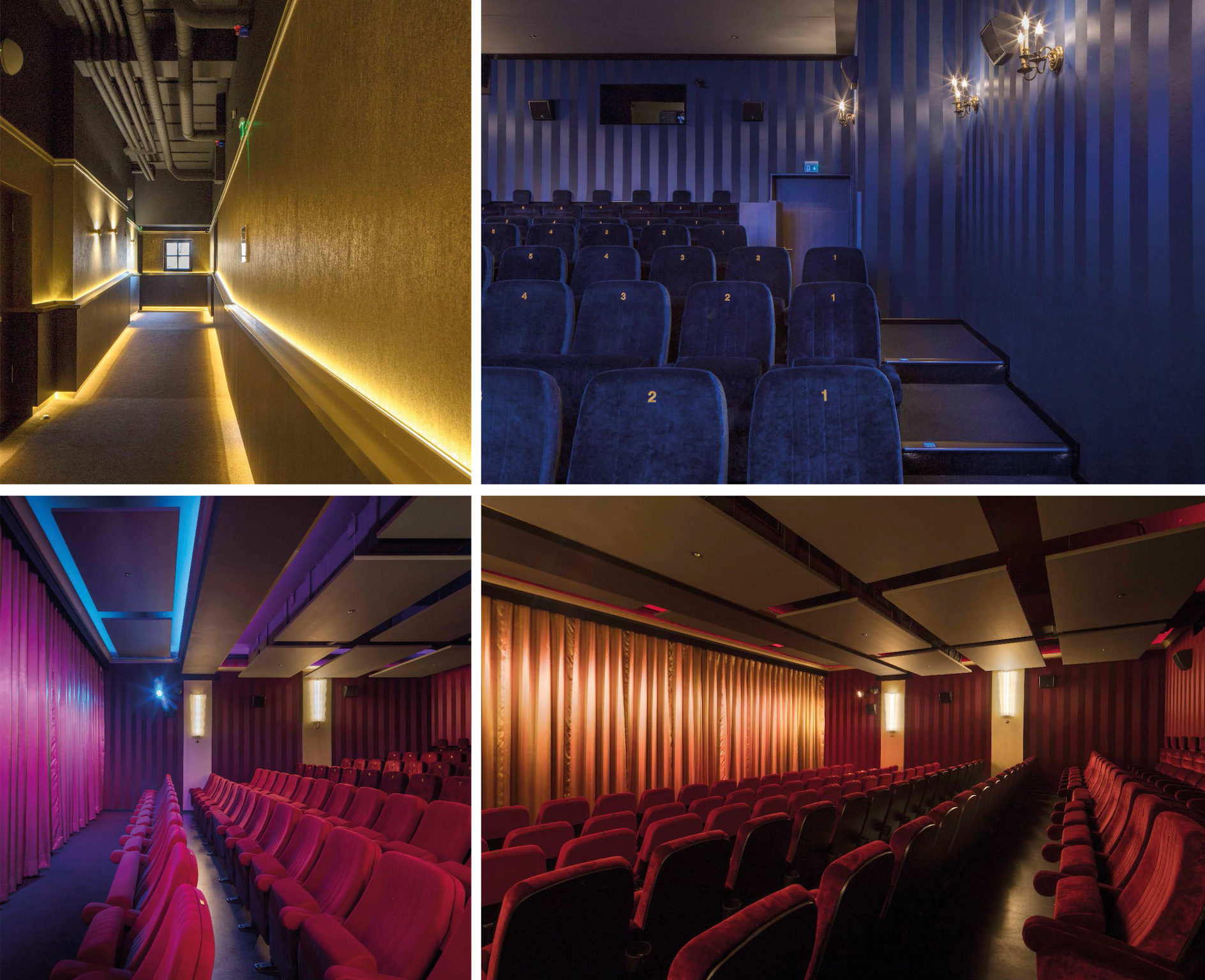