Project viewings and tours, workshops and presentations, light performances and vernissages… from cinema to department store, from theatre to airport… whether for experts, consumers, locals or newcomers, children or university students…. the Munich ‘LICHTWOCHE’ Festival of Light diverse program had something for everyone. Compared to last year’s opening, the festival scored even higher in terms of program variety and visitor numbers. From October 28th to November 4th, more than 700 visitors were enthralled by 27 different program items, including 22 with free admission.

All visitors must have realized this right from the outset, during the opening event in the evening: The Munich ‘LICHTWOCHE’ Festival of Light is not just about knowledge transfer and information exchange, but primarily about the joy of dealing with light. The location for the opening celebration could not have been any better. The ‘Freiheiz’ is situated in the former turbine hall of a heating and power station with industrial charm. The opening event was marked by the awards ceremony for the student competition “Lichtgestalten _ Licht gestalten”. The interactions between the light painters Uli Tausend (1000 lights), Bernhard Rauscher (Lumenman) and Elaine Serafini and the audience fascinated the audience, creating wow factors galore.

And at the entrance to the “Freiheiz” the fire performer Tyrian Feuerdreher was responsible for warm moments of light in this cool October night. Inside, the Alpenrock party band Volxrock turned up the heat, with visitors celebrating with abandon until late that night. This evening was a fitting kick-off for the upcoming week of events.

THROUGH THE SMART CITY IN A BMW INTO THE NIGHT ON EARTH
Saturday around noon, the program started with the first items in the new “Stadtteillabor” at Westkreuz. Here as with nearly all the events, there was active participation by designers, experts, community representatives, and citizens alike. The EU sponsorship program “horizon 2020” was presented in lectures and presentations. The cities Munich, Vienna and Lyon are participating in this program with the project “Smarter Together.” For the Neu-Aubing district, the prototype of an intelligent lamp post was demonstrated, which may also be used in the newly planned district Freiham Nord, following a trial phase. 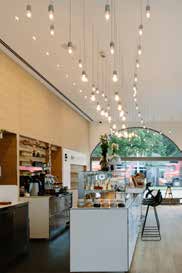 In the afternoon, Lighting Designer, Gabriele Allendorf, introduced the lighting concept and lighting at the “Mo66” Café by BMW Classic, equipped with iGuzzini lamps. This was followed by an exclusive journey through 100 years of BMW automotive history, with exciting stories about the attractive old-timers and their owners.

In the evening at werklicht in Haidhausen, about 100 guests gathered for the vernissage “Night on Earth” by light artist, Peter Euser. His spectacular light images were accompanied by a reading with actors and specially composed music. 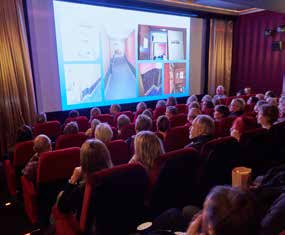 Early Sunday morning, everyone met up at the newly restored “Neues Rex” Cinema in Laim, to listen to the interesting and emotionally moving explanations of Lighting & Cinema Designer, Anne Batisweiler. Surprised by her, in part very personal insights into her work and the incredible results, was followed by an exclusive showing of the German drama “Icons of Light.” The show was nearly sold-out, but aside from its name, it did not have a lot in common with light. Most participants then took advantage of the remaining Sunday to enjoy the greatest of all sources of light outdoors.

The next day, interested participants had an opportunity to be wowed by a show at the Mathäser Filmpalast cinemas. During the various phases of the cinema visit, the new LED lighting system allows for the presentation of a variety of light scenarios. Through complex programming, Lighting Designers Manfred Beck and Matthias Singer demonstrated the possibilities of a nearly 360% effect using various trailers. 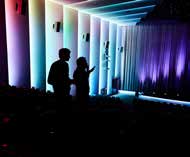 For the first time, during the ‘LICHTWOCHE’ Festival of Light, the youngest visitors – kids- were also included; starting on Saturday, as part of a children’s workshop, they were able to “Experience Light” and experiment with it. Educator Maria Schmidbauer took the about ten kids along with her on a journey into the world of light and physical phenomena.

On Monday, at the Kinderkunsthaus Schwabing, teenagers had an opportunity to design their own lamp, with the assistance of a Designer.

The handling of light was dealt with just as playfully during the Guerilla Lighting Tour, early Monday evening. The initiative was under the heading “Lichtportale” (Portals of Light) in Munich, to draw attention to the city’s gateways. The plan to temporary light up the Hackerbrücke bridge, was implemented so successfully by participants, that it was then even broadcast on television.

When the day was drawing to a close, everyone met up at the Light Solution Center in the evening. Owner Dominik Ortmann was once again a welcoming host and Uli Sattler an interesting speaker, who presented his factory, lamps and projects in his usual charming and laid-back manner.

The next day, a public holiday, visitors, some of whom had traveled from far away to attend the ‘LICHTWOCHE’ Festival of Light, had an opportunity to enjoy the city. In the early afternoon hours, the opening of the “Citylights” Exhibition provided further inspiration.

BEAMING STRAIGHT ACROSS MUNICH
On Wednesday, ‘LICHTWOCHE’ continued with a presentation about the Luise-Kiesselbach Tunnel. The presenters, providing an exclusive insight through the breakdown bay, spoke in detail about tunnel lighting and operating equipment.

At the same time, more “culinary” types of enjoyment were to be had at Eataly. The delicatessen chain in the Schrannenhalle at Viktualienmarkt is considered one of the most successful new launches in the industry. It is based on the concept of Italian food culture with natural and homemade delicatessen. The Eataly visit was led by a representative of the delicatessen chain and Christof Lörwald of Artemide, which used their lamps to place these culinary delights in the right light. At the end, guests were treated to an aperitif at the bar by Artemide. 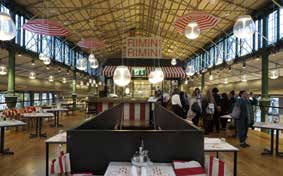 In Oberpollinger, one of the heritage department stores in Munich, the Italian influence was also noticeable – here it took the form of iGuzzini lamps. Light Designer, Isabel Sternkopf, of Licht Kunst Licht AG and Stefan Flötner from the KaDeWe Group, provided interesting insights into the interior design and sales concepts for the new areas, the corresponding lighting designs and each of the specific technical implementations of the lighting solutions.

The evening centered around “feeling good” event. In the first Germany showroom of Nurus, a producer of high-end office furnishings from Turkey, approximately 100 guests enjoyed good wine, appetizers and relaxed conversation in a comfortable environment. The themed evening was complemented by informative presentations about light, health and work environments. During the event, visitors had an opportunity to experience the Light Path in front of the door first-hand. This room on a truck is a mobile, walk-in light installation, which was created in collaboration with Austrian light artist, Friedrich Biedermann. It is a realistic recreation of the various sequences of daylight. Another alternative offered to ‘LICHTWOCHE’ participants was to explore the Munich Airport during an exclusive tour of lights on a fantastic bus trip. Günther Sellmeier provided information about areas which are usually not accessible, such as airfield lighting, the runway, aprons and outside facilities. 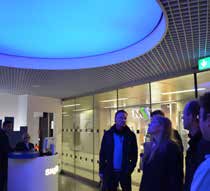 ILLUMINATED SUBTERRANEAN BRAIN WITH THEATRICAL SILVER LINING
If Munich does in fact have a giant brain, then it must be located at the technical operations center (Technisches Betriebszentrum). This brings together all the facilities, required to monitor and safeguard traffic on Munich’s roads. Following a tour and presentations, the participants joined together with Guerilla Lighting to place the building in a new light.

At the same time at another location, a walk-about through the newly designed mezzanine level at the train station Bahnhof Marienplatz took place. Speakers from the offices of Ingo Maurer, Allmann Sattler Wappner, Osram, Palais Mai, Widmann Licht and the municipal utilities, Stadtwerke Munich, presented the architecture, design and lighting concept. 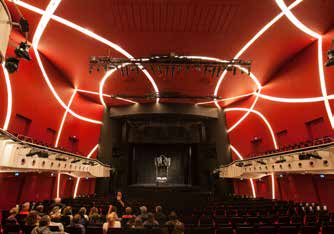 Simultaneously there was also a tour through the Deutsche Theater. Here, participants saw a scene from “Dance of the Vampires” without stage lighting, while touring through the Deutsche Theater Munich. Afterwards all participants realized, of course, that nothing works without light. During a perfectly prepared and lively tour, participants then discovered the importance of managing stage and lighting technology, as well as what kind of amazing details the lighting in this theatre has to offer.

Lighting Designer Gerd Pfarré served as jury president for the student competition during the first Munich ‘LICHTWOCHE’ Festival of Light and celebrated the opening of his new offices in Schwabing at the same time. This year, he presented photographic material there, which he and his employees shot during the year in a variety of situations and areas, some impromptu. All the photographs had this in common: Although they cannot lay claim to perfection, they do offer many emotional moments on the topic of lighting.

In the Occhio showroom, the about 200 guests enjoyed the laid-back party atmosphere and an opportunity to discover the multi-functional Occhio system in its diversity, allowing one to be inspired by the many design options.

SENSORY EXPERIENCES AT THE DEPARTMENT STORE AND IN THE OLD TOWN
The last day: Ludwig Beck, the historic department store, started off with a tour through their areas of lighting and sales. The vivid presentation was supported by the speakers of Ansorg, a producer, which had equipped the entire department store with lighting, including LED lights. 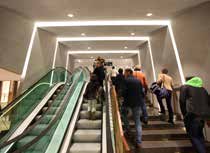 The closing was on a culinary note, at Café Käfer, with cake and Prosecco. The meeting place for the light and city walk through the old town was just a few steps away. The walk offered interesting information about the history coupled with insights about street lighting.

The two speakers, tour guide Gerhard Schubert and Ralf Noziczka from the building division (Baureferat) kept the about 30 participants engaged in increasingly cold temperatures, sharing details, which were surprising even to locals. This combination of city tour and lighting walk was truly novel and should be continued!

At the end of the day, there was a get together at the designfunktion new office. All manner of culinary delights and interesting presentations on the topic of “Light and Acoustics” and “Light and Happiness” were enjoyed.

And then, it was suddenly over … The Munich ‘LICHTWOCHE’ Festival of Light was like a fascinating marathon through the cities’ most varied facets of light.

At the end of the day, there was a get together at the designfunktion new office. All manner of culinary delights and interesting presentations on the topic of “Light and Acoustics” and “Light and Happiness” were enjoyed.

And then, it was suddenly over … The Munich ‘LICHTWOCHE’ Festival of Light was like a fascinating marathon through the cities’ most varied facets of light. 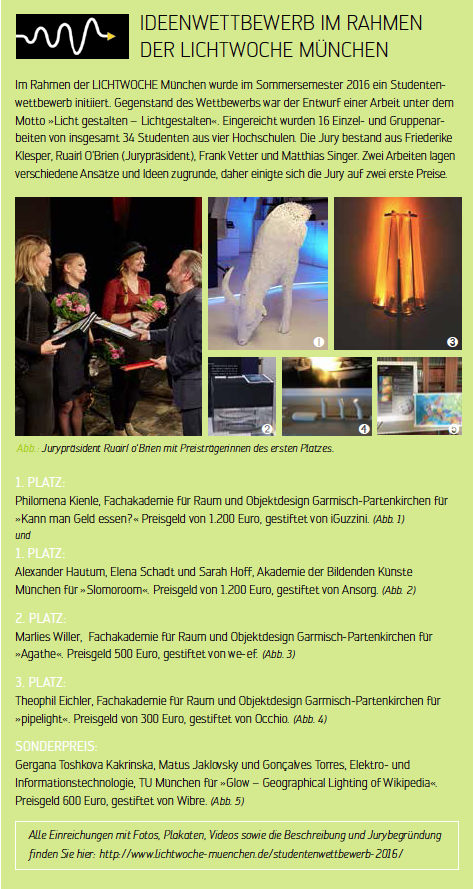