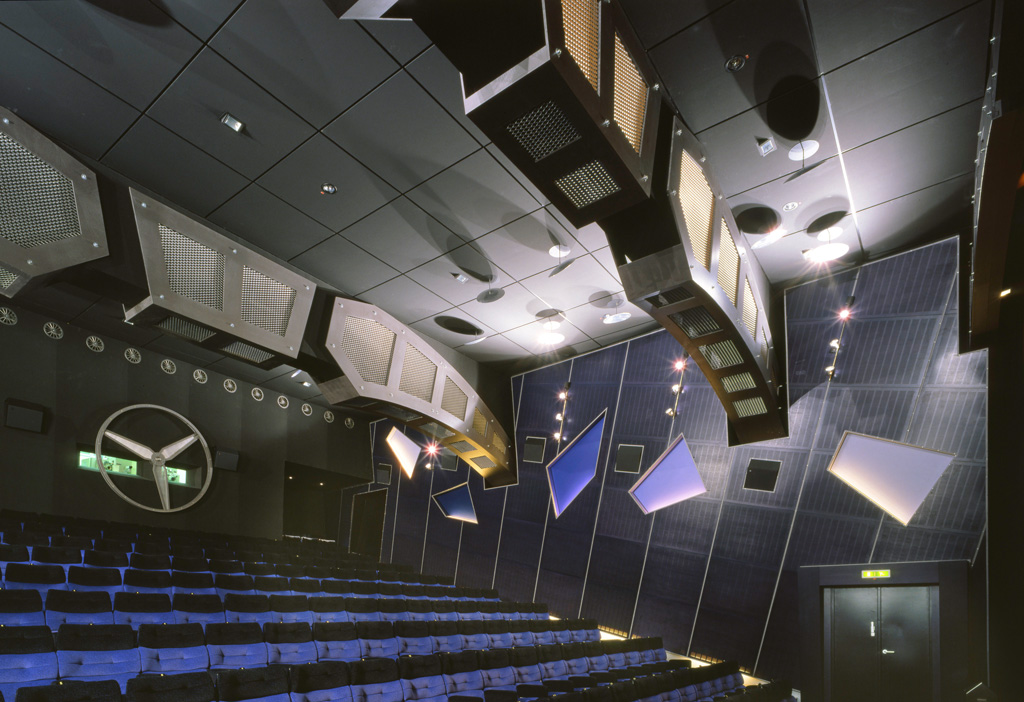 The large propeller mounted on the rear wall of the theatre appears to thrust it forward like a spaceship. In any case, the string of lights with chainlight circuits mounted behind the propeller provides the impression that the propeller is revolving (in both directions)

Motion-picture theatre – this term is aptly rendered in German as Lichtspieltheater: „light playhouse“. Movies as the art of playing with light!
Major challenges for lighting specialists include not only projections of the film onto the screen of a cinema: a very spezial and essential assignment also includes immersing the space and colours experiended by cinemagoers in a pleasant ambience, in the creation of a cosy as well as exciting atmosphere. The whole objective, of course, is to provide a medium in which mood, illusion, and glamour á la Hollywood can be successfully conveyed,. Despite the primary elements of playfulness in motion-picture theatres, however, wall-finish lighting, panic lighting, and emergency lighting elements also play a significant role in cinema operations. This responsibility demands a great deal of expertise from light designers – and their work is hardly possible nowadays without successful collaboration with lighting experts, light tests, and computer-aided design techniques. Indeed: a great mumber and vraity of officialstipulations and client expectations must be taken into account.
In order to get behind some of the secrets of playing with light, we have investigated a number of cinema projects carried out by the Munich interior designers Anne Batsweiler and Barbara Adelmann, in collaboration with LINIE 8, Lichttechnik München. 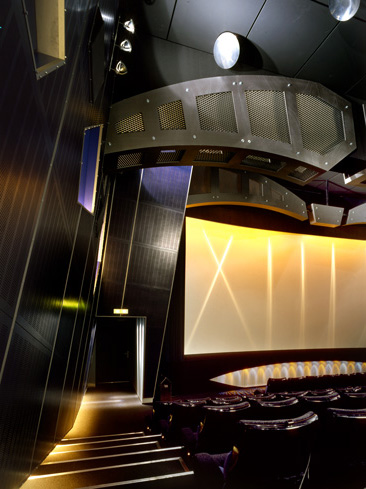 Reversal mirrors are installd between huge lattice beams, where they conceal the enormous joists. Installation of the light fixtures on the wall simplifies their maintenance

THE SPACESHIP – THEATRE “B”

Design concepts and ideas
You have to walk up many stairs to get to Theatre B, but once there, after passing through the “lock”, you enter the “Spaceship.” Spaceship was the design theme for the theatre conversion.

Giant ceiling joists with a height of 180 cm transect the ceiling, which was deliberately constructed as high as possible. These “monstrosities” were intentionally emphasized! In addition to an acoustic casing of mineral wool and fabric, they now exhibit a curved structure made out of MIO (micaceous iron ore) coated wood and rough mesh. The side walls were lined with slotted wooden panels, stained dark blue and covered with acoustic insulation. The carpenters went all out here: The space itself has a slight conical shape. The wall paneling rises from the bottom front to the back top, i.e. they initially extend more and then less into the space. In addition, the elements are constructed to lean forward, which is emphasized by the silver-lacquered U-shaped profile. While the speakers are arranged below this tilt, the large girders cut through the wooden panels vertically. The free, dynamic trapeze shape of the niches, each illuminated from one side in a range of blues, conjure up associations to “somewhere out there.”

The step lighting, integrated in the base area of the walls, appears to be rising due to the lateral spatial boundaries. Up and down turned concave aluminum mirrors seem to fly like UFOs under the expansive acoustical ceiling. They indirectly deflect the wall-mounted light to the bluish-black seating. The mirrors also cast elliptical silhouettes on the ceiling structure, thus underscoring the flying effect of these elements. The corresponding theater lighting in the aisle area along the wall makes replacing lights much easier than having them located above the seating configuration.

A giant propeller is located at the back of the theatre between the two projection booth windows. Backlighting with blinking tube-lights seemingly makes the propeller rotate.

While patrons are gathering and the theater slowly fills, a structure of highly concentrated light beams, located in front before the screen, concealed behind the stage girder, turns on and off to the music. Below, in the “radiator grill”, orange light alternates with blue light, casting radial shapes of light on the floor. Then the curtain rises, the spectators look through the “cockpit window” and take off to another world. Caught up in the illusion of motion picture …

Description of lighting technology
Theater ambient lights provided by wall-mounted triads, each attached to a coaxial bus bar with interior conductor and 300 VA transformers (24 halogen spotlights, 24 Volt technologies, fitted with 100 Watts) is redirected by aluminum mirrors on the ceiling to the seating configuration in the auditorium, without creating glare. The mirrors with a diameter of 40 cm are fitted with turn/ tilt joints and adjustable. A computer program was used to calculate their position. They are arranged in a convex or a concave position, depending on the distance to seating and the rising podium unit. The pivoting and rotating spotlights (type Co-Ax C.A.D. 9 by LFF) allow for further adaptation to the variable distances between light source and deflection mirrors, by adjusting the brightness of the reflector (from 1,600 up to 4,000 cd/klm). The remaining lights in the peripheral area of the mirrors create an interesting effect of deep and partial shadows. The positioning of spotlights along the sidewalls relates in particular to the great height of the space, as replacing lights above the seating area would have involved great effort.

Dimmable tube lights were utilized in the wall niches – already familiar from the entrance to Theatre B – and for required step lighting. This makes the acoustical wall paneling appear as if it is “floating.” In the base area of the screen are 25 cold-light reflectors of 50 Watts each, equipped with a coloured front-lens filter (alternating in the complementary colours blue and orange) that cast intersecting strips of light onto the carpeting between brushed matte stainless steel pipes. This effect can be controlled on the matrix, including alternating to the music in the theater.

From above – concealed behind the stage girder – nine “lances of light” by iGuzzini (100 Watts each) provide vertical and intersecting narrow beams of light to the rhythm of the music – a light show for the awaiting audience. Eight additional halogen floodlights situated between them (250 Watts each, R75, also by iGuzzini), fitted with coloured front-lens filters, create a veil of light of softly decreasing intensity as it comes down. Apart from security lighting in continuous lighting mode or the lighting for the cleaners, all of the light sources in the Theatre B area are thus dimmable using a control unit in the projection room, were they can they can be switched to change in dramatic fashion. 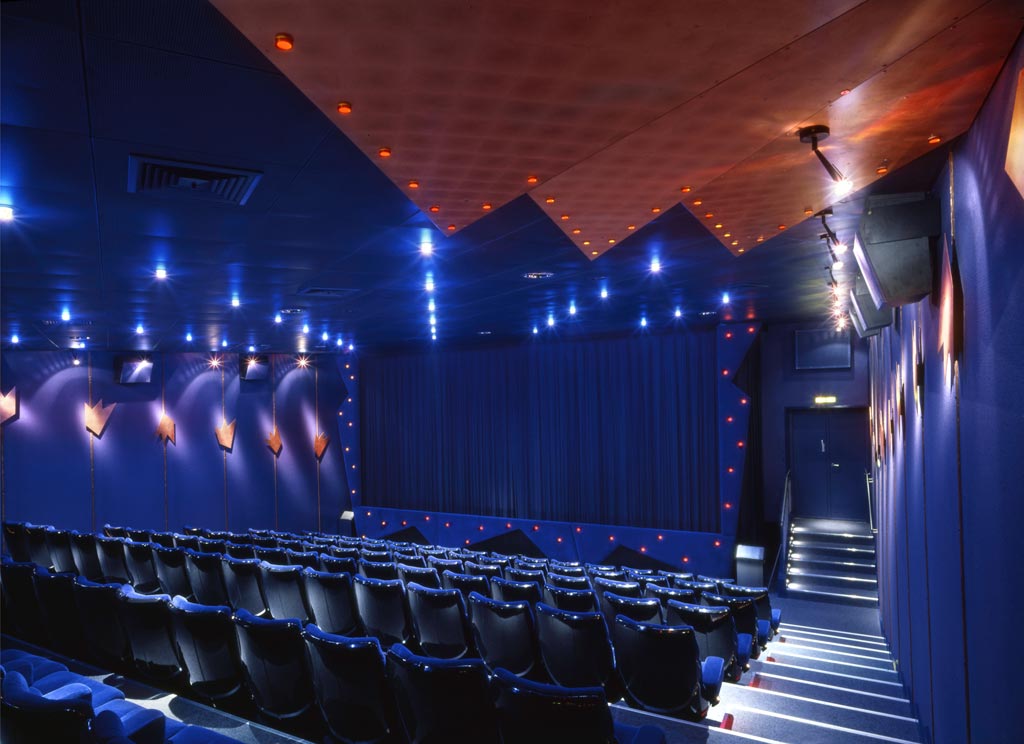 Design concepts and ideas
The decision to use comfortable, royal blue Pullman seating provided the inspiration for the decor: the idea for the „Königssaal“ was born. This name, meaning the King’s Hall, was the starting point fort he development and implementation of the designs. Copper crowns on the walls, satin-swathed, copper-studded doors, plum coloured fabric wall covering and the glittering deep blue of the perforated, panelled ceiling all contribute to a „majestic“ ambience.
Trumpet-shaped lamps throw shadows across the crowns on the wall, lending a dramatic touch to the whole room.
Blue glass luminaires in the ceiling accentuate the colour scheme of the seats providing perfect harmony with the overall concept.
Before the film begins, the flickering orange-coloured lights in the zig-zag frame of the screen flare up before dying down again slowly. The film begins when the theatre has gone dark again. 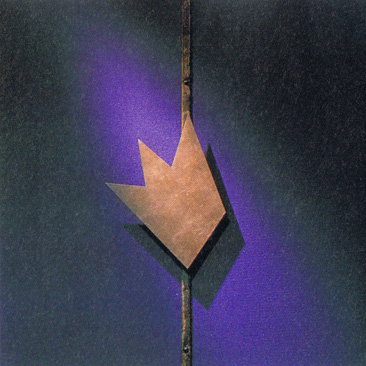 The Light
Orange-coloured, flickering, lights were placed above the entrance to the auditorium, in the crown suspended from the ceiling and all around the upholstered frame of the screen (the low voltage neon glow lamps wiht protective resistor commonly used in switchcabinet). Moto-controlled regulating transformers are used to achieve linear voltage dimming which causes the lights to flicker in a random way as a result of ignition and extinguishing. No complicated electronic controls are required. Integral spotlights wiht blue glass covers provide antidazzle illumination fort he room and varied angles of radiation and reflector strengths (20, 35, 50 Watts) achieve a uniform light intensity above the seats despite the different heights of the ceiling. This was all desingned in advance using precise light calculations.

„Trumpet luminaires“ (50 Watt NV) on the walls cast dramatic shadows through crowns mounted in front of the material of the wall covering, accentuating the contours of the walls and illumination the aisle Stepps. The lighting for the steps of the upper area is provided by hard-wiring the battery/safety lighting system. The calculated nominal voltage of the individual fluorescent tubes is 35 % higher than the battery voltage. This reduces the reflections rebounding onto the screen and also doubles the life of the lamps. Special integral luminaires in the base of the hand rail were used to light the exit steps, so as not dazzle cinema-goers in the Pullman seats. The cleaning light safety lighting of the standby light circuit consist of a combined element with Dulux insert and electronic ballast. This means that a minimum of energy is required in order to achieve the necessary level of light in the theatre. 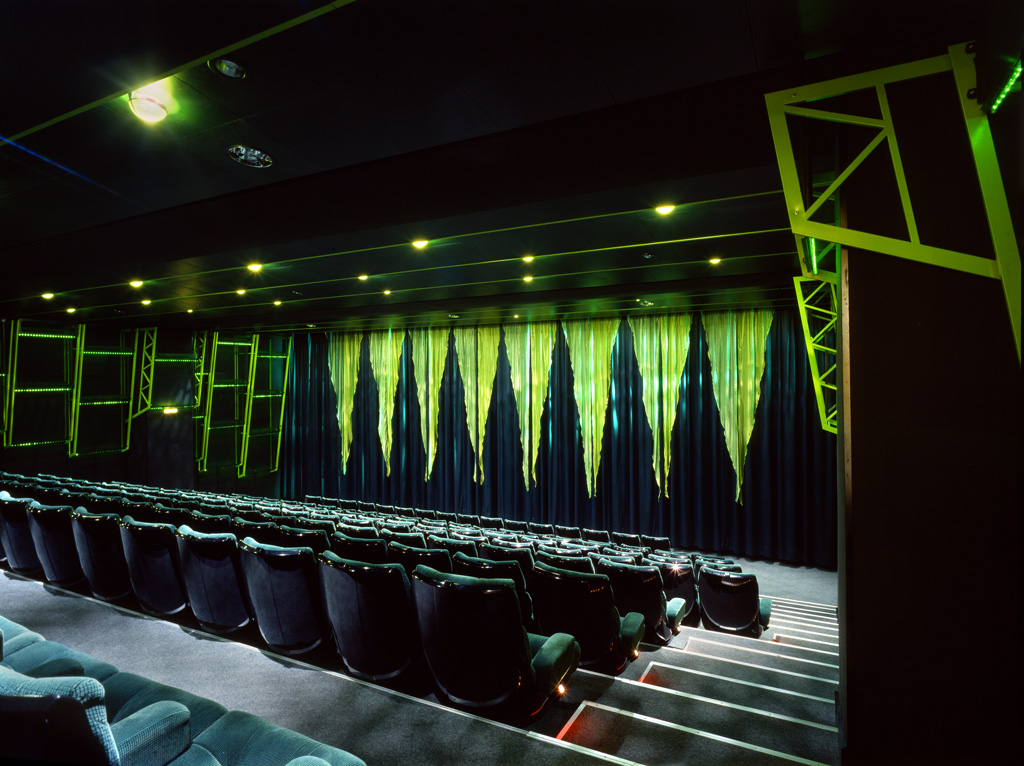 The Dragon Room of the Royal Kino movie theatre in Munich, dramatically set on display by a great variety of illumninants with sparkling and brilliant green effects

THE THEATRE “E” – THE DRAGON CAVE

Design concepts and ideas
Thick posts to the left, right, and large ceiling girders divide the theater into a series of niches. These conveyed the feeling of being inside the skeleton of a huge dragon. And there it was, the design concept: The design concept included dark-green seating, emerald green flooring, a green shimmering metal ceiling, black wall covering, protected by mesh scales in different sizes, lime green sight rails and girders as well as iridescent dragon spikes on the seaweed green of the curtain. Of course, the lighting design had to add to this feeling. Under the ceiling, where metal components are arranged in a zigzag fashion, so-called “bulbs” (bright green perforated plate hemispheres) distribute the light into many tiny points of light. This creates the impression of air bubbles under water – as if you are visiting Nessy. In the front, the curtain with the “row of teeth” is only lit green from one side. Green tube lights are installed behind the mesh scales. As soon as the movie starts, they turn off in various sequences, like the dying sparks of a fireworks display.

Description of lighting technology
The ELV spotlights (pivoting and rotating) in the scale-like dark-green ceiling are covered with so-called “bulbs” which are hemispherical perforated plate components with 40 % light transmission. The standard white recessed floodlights also appear to be bright green due to the back reflection of the interior of the bowl. Given the increasing height of the theatre, the light sources closer to the screen are increasingly more powerful to ensure the same ambient brightness for the seating area.

The staggered sidewall paneling consisting of coated steel supports and wire mesh contain glowing green tube lights. A switch matrix is used to control different groups so that they seem to randomly switch on and off in approx. 15 second intervals, in a rhythm similar to an extinguishing fireworks display.
Three spotlights installed on the right-hand side only (6 Volt, 35 Watt) create an asymmetric display of grazing lights on the screen curtain. 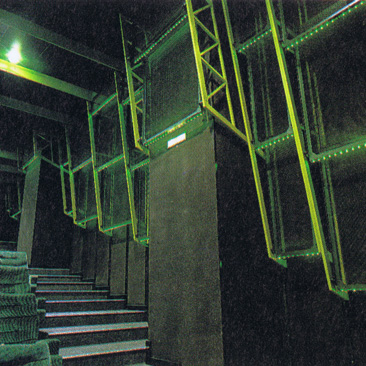 The expanded metal mesh covering the walls serves to support the light fixtures, tot mount the surround loudspeakers, and to protect the fabric wall covering