The “intermission” on Amrum is over

Norddorf – The island of Amrum in the North Sea has a cinema once again. Two years after the demolition of the old building, the newly built LichtBlick Island Cinema opened its doors on April 17th – equipped with state-of-the art technology and an attractive line-up of movies. 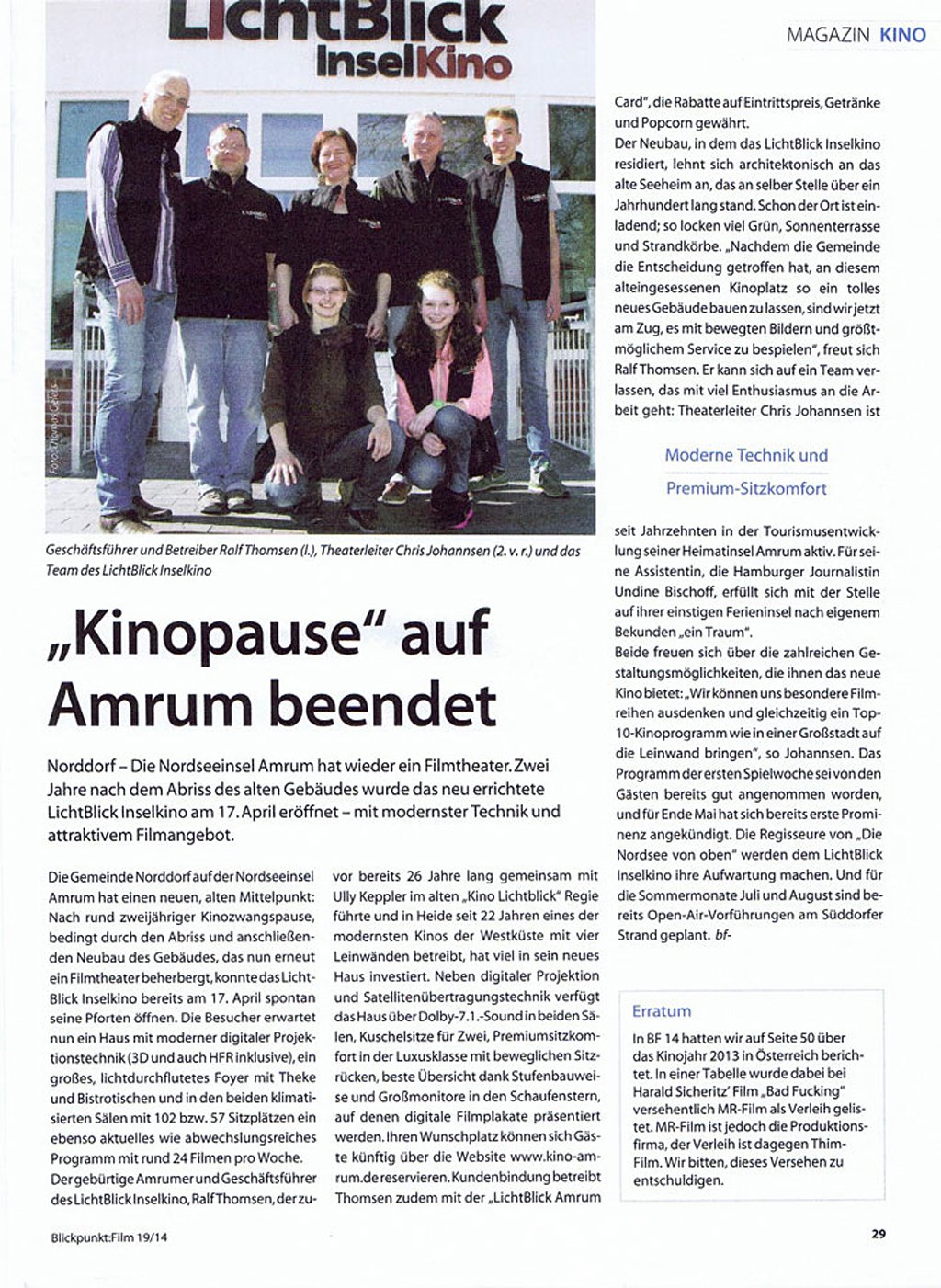 The community of Norddorf on the North Sea island of Amrum has a new old center: After about two years of an enforced cinematic intermission due to the demolition and subsequent new construction of the building that now houses a cinema again, LichtBlick Inselkino Cinema opened its doors on April 17th. A cinema equipped with modern digital projection technology (3D and also HFR included), a large, light-flooded foyer with counter and stand-up tables and two air-conditioned auditoriums with 102 and 57 seats respectively, as well as a current and varied program with approximately 24 movies a week is now ready for patrons. Ralf Thomsen, a native of Amrum and manager of the LichtBlick Inselkino Cinema, had already been in charge of the old “Kino Lichtblick” for 26 years together with Ully Keppler. He also runs one of the most modern cinemas along the German West coast in Heide, one with four screens.

This new venture was a major investment for him. In addition to digital projection and satellite broadcast technology, the cinema boasts Dolby 7.1 sound in both auditoriums, extra-wide cinema seats for two, premium seating comfort in the luxury class with adjustable backrests, and excellent sightlines due to tiered construction. The cinema also features large screens in the display windows, on which digital movie posters are displayed. Guests will be able to reserve their seat of choice online at www.kino-amrum.de. Ralf Thomsen promotes customer loyalty with the “LichtBlick Amrum Card”, offering discounts on ticket prices, drinks and popcorn.

Architecturally, the new building in which the LichtBlick Inselkino is located, borrows from the old Seeheim, which was situated at the same location for more than a century. The site alone is already inviting, with plenty of green-space, a sun deck and wicker beach chairs beckoning. “Now that the community has made a decision and built such a spectacular new building in this long-established cinema space, it is our turn to populate it with movies and the best service possible,” says Ralf Tomsen. He can rely on a team that is filled with enthusiasm for the work ahead: Theater Director Chris Johannsen has actively been promoting tourism on Amrum, his native island, for decades. According to his assistant, journalist Undine Bischoff, a native of Hamburg, her position in what used to be her holiday destination, is the fulfillment of a life-long dream.

Both are excited about the scope of the many design opportunities offered by the new cinema: “We can put together new film series and at the same time bring a Top-10 cinema program like those offered in large cities to the screen,” so Johannsen. The program for the first week was already well received by patrons and the first celebrities have already announced themselves. The Directors of “Die Nordsee von oben” (The North Sea from above) will pay a courtesy call to the LichtBlick Inselkino. And, open-air screenings at the Süddorfer Beach are scheduled for the summer months in July and August.