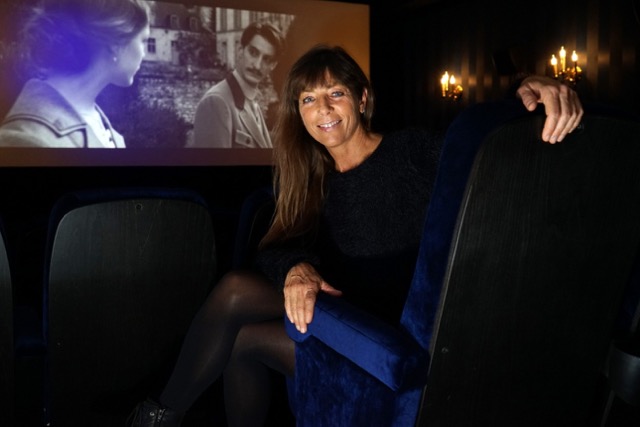 Interior Designer, Anne Batisweiler, designs and illuminates cinemas. During the Munich ‘Lichtwoche’ Festival of Light, she is showing visitors around the renovated “Neues Rex” Cinema Laim, and explains, how lighting contributes to the grand illusion that is motion pictures.

“After all, anything is possible, when it gets dark. Literally anything. And that is very fortunate”, is how film critic Michael Althen concludes his book “Warte, bis es dunkel ist” (Wait Until Dark), a must read for anyone who loves the cinema, even if only a little. One person, who contributes to the illusion, allowing us to forget about harsh reality at least until the credits roll, is Anne Batisweiler. “Once the lights go out I only want to see the movie, and nothing else,” she says emphatically. This Interior Architect & Lighting Designer has been designing movie theatres for 25 years now. For her, the German word for movie theatre, “Lichtspielhaus”, which includes the world “light show,” holds special significance. On this Sunday, October 30th, Ms. Batisweiler is conducting a tour through the “Neues Rex” in Laim, a heritage movie theatre in Munich, which was recently remodeled, based on her designs. This is part of the program during the Munich ‘Lichtwoche’ Festival of Light, which runs until November 4th, and is offering a broad spectrum of visual attractions.

Arriving at this Architect’s heritage villa in the South of Pasing, a district in Munich, my first point of contact is her friendly dog, carrying a sneaker. While scanning the home for sources of light, the dog does not let me out of its sights. The stairway is adorned by a multi-colored chandelier – an optical contrast to the two, somber and severe oil portraits showing the previous owners. In the meeting room of Ms. Batisweiler’s offices on the ground floor, there are two bucket-like lamps – an Ikea model from the turn of the century. Returning quickly to the darkness in the movie theatre, though, what sounds like the gentle extinguishing of a lantern or the blowing out of a candle in Michael Althen, seems quite dry and austere in the words of an interior architect. Creating darkness in a movie theatre is, after all, not that simple:

According to Anne Batisweiler (54), there are a number of EU and DIN standards for safety lighting systems that must be observed. After all, in an emergency, or for any other urgent business, patrons must be able to make their way quickly out of the movie hall. She has seen time and time again that the illuminated escape route pictographs are over-dimensioned for the size of a movie theatre, and that requirements are exceeded. Smaller pictographs would completely suffice, she knows. Small tricks, big impact.

When we speak about lighting in movie theatres, we are talking about much more than the glimmering screen in the pitch-black theatre hall. For more than two decades now, Ms. Batisweiler has designed and re-modeled many cinemas in Munich as well as collaborating on many projects. In addition to the Neue Rex this has included a large variety of cinemas such as the Atelier, the Atlantis, Eldorado or the Gabriel-Filmtheater, the Museumslichtspiele and the Gloria-Palast, but also Multiplex palaces such as the CinemaxX or the Mathäser cinemas. And the designs for the Cinema Baikonur in Almaty / Kazakhstan is also hers. Here, patrons can observe Russian rockets lifting off from the world space station into the great beyond, but they can also go to the movies.

“Each cinema has its very own history,” says Anne Batisweiler. The architecture, the façade of a building must indicate its intrinsic purpose. Therefore, a movie theatre should display its interior workings in daylight as well. The neon lettering used in the past does not have a long life, and would also be too expensive and environmentally harmful. Modern LED-technology offers so much more, so Ms. Batisweiler. She explains that when it comes to the movie theatre lobby, patrons should neither expect dimly lit dark corners, nor harsh hospital lighting – although the popcorn should be well lit. Lighting, says Ms. Batisweiler, should accentuate and explore space, evoking a kind of dramatic composition. Take the Gloria Palast Cinema for example, says Anne Batisweiler: In the 80’s, not much was left of the once so glamorous 50’s heritage movie theatre – even after a renovation. As per the design concept created by Ms. Batisweiler’s offices, the old, sparkling, water droplet lights were replaced with fountains of rhinestones using LED-technology, reminiscent of the color-illuminated water works in front of the screen, which once used to keep the first rows of seating slightly wet.

As a child, Michael Althen had to listen to his parents saying: “You are ruining your eyes.” Lighting Designer, Anne Batisweiler explains, “the eye needs time to adjust to the darkness in the movie theatre.” Therefore, she created light traps located in the Rex Cinema hallway. Once you have passed them – to quote Michael Althen one more time – “it really gets dark, and then you enter that world, which seems to have been waiting for you right from the start.”