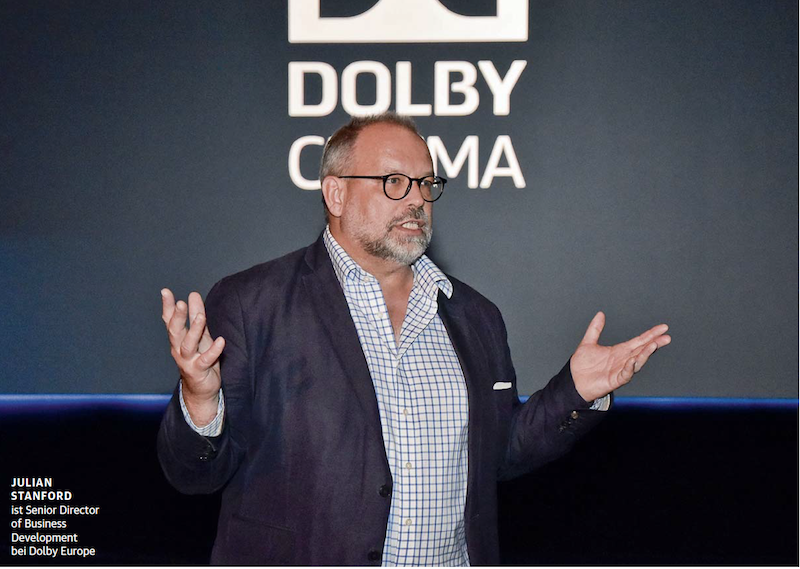 How did Dolby Cinema develop?

Several years ago, a gentleman by the name of Doug Darrow (these days SVP Cinema Business Group with Dolby), was tasked with realizing the Dolby Cinema vision. He began by analyzing the existing solutions on the market, and then investigated the new technologies under development. Next, together with his colleagues, he sought out the leading creative individuals in the film industry – directors, cinematographers, sound experts, producers, etc. and asked them to describe what they believed to be the optimum, the very best, for motion pictures. This feedback was taken to Poppy Crum, our leading scientist at Dolby Laboratories. She is a neuroscientist who looks at how the human brain receives and processes audiovisual impressions. On this basis, three core elements of the perfect movie theatre experience were identified, for which the technological solutions were then developed. Dolby Atmos was the first market-ready result of this development. Sound, the components of which can be positioned anywhere in an auditorium. Now we have Dolby Vision, a technology created to show viewers exactly those images that filmmakers have created for them. No compromise.

And the third element?

Is the environment. For us this is a relatively new field, but an important one. As you know, Dolby comes from audio, in which we have been working since 1975 and which we continue to perfect. However, at our headquarters in San Francisco alone, we have over 100 research centres where our researchers are working on all aspects of a continuously improved experience. This also includes an optimum environment. An environment in which you perceive exactly what you are supposed to perceive, without any distractions. This guiding principle also led to the development of the “Audiovisual pathway,” the curved entrance way in which sound and images take you into another world, before you even enter the actual auditorium. It creates a transition to an environment that is completely in the hands of the filmmakers. Furthermore, it allows another, mental transition to the realization that this will be an extraordinary experience. If the attendees have paid the extra charge, they need realize instantly that it was a good investment; they need to know even before the start of the movie that they are in a very special place. All of this is what makes the experience so satisfying.

Where do you see yourself placed in the market with Dolby Cinema?

If it’s the price point you are getting at: definitely at the forefront. However, the real question is what moviegoers can expect to get for their money. We are offering uncompromising quality. Nothing less. This is about realizing the vision of the filmmakers, about transporting viewers into precisely that world the filmmakers want to share. After all, isn’t that what going to the movies is all about? To experience what filmmakers have created? The concept applies to local arthouse films just as much as to major Hollywood productions. And for that reason, we are not really interested in any gimmicks in the auditorium that distract from the actual vision. Our passion is to do optimal justice to the film.

What is Christie’s contribution as partner for projection?

Our patented HDR technology is an extremely high-tech solution that cannot just be plugged into any projector – it’s not like replacing a graphic card on a PC. A lot of experience is required to adapt it. We chose a partner who not only has this experience but is also able to work with us around the world. Christie came on board early on in the development process and we worked closely together to marry Dolby Vision with their 6P laser projectors. Since then, Christie has been building the projectors for Dolby Cinema under licence and is also servicing and maintaining them.

“We are very excited about what has been achieved here, in the Mathäser Filmpalast.”

What kind of support are you getting from the studios?

More and more every day. The heads of the movie industry know that our black is unbeaten. They know that our contrast ratio is infinitely better than specified by the normal DCI standard. Creatives like e.g. James Cameron, Jon Landau or most recently Bradley Cooper are increasingly realizing that Dolby Cinema is exactly how they want to present their films. Some press screenings of major movies are already occuring only in Dolby Cinemas – for good reason. And A Star is Born was shown to viewers exclusively in Dolby Cinema auditoriums even before its regular start.

What kind of a role will HDR play in cinemas in the future?

We can probably agree that technology generally does not move backwards. We are experiencing continuous advancements, accompanied by increasing audience demands. I am therefore convinced that HDR will increasingly be selected – and of course I hope that Dolby Vision will take on a leading role. In any case, we are excited to be able to collaborate with Kinopolis; a company that does exactly what sets the best operators in Europe and in the whole world apart: You invest in the experience – in the technology as well as the environment. In my opinion, we are now talking about the best auditorium in Germany, accompanied by a corresponding exterior, with its wonderful lounge.

So, you are satisfied with the result?

It’s absolutely fantastic! As you know, there is this stereotype of Germans being extremely detail-oriented and accurate. Well, in this case, that’s one hundred percent correct and totally in line with our guiding principle. At Dolby, we don’t compromise – we are perfectionists. Kinopolis was a perfect partner, because they have the same approach: the desire to offer the very best to patrons. We are very excited about what has been achieved here, in the Mathäser Filmpalast.