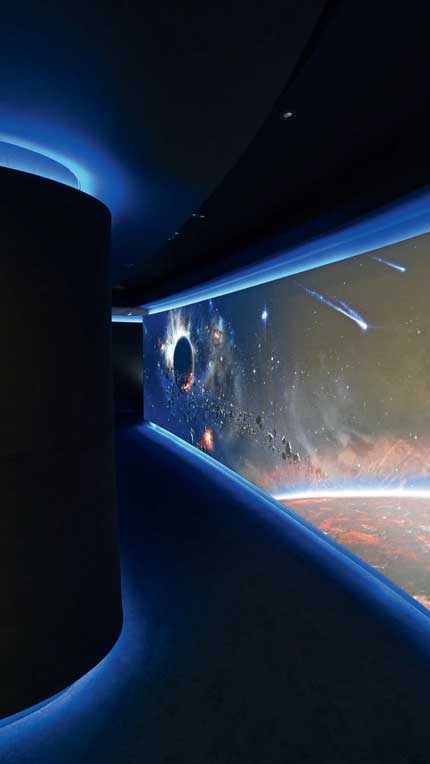 IMMERSE YOURSELF
Gateway to another world: the audiovisual pathway

At the Dolby Cinema in Munich, several elements ensure that the experience starts already before entering the auditorium. These include a very unique lobby.

When you visit the Dolby Cinema at the Mathäser Filmpalast in Munich these days, you may not even realize the architectural feat involved in integrating this design concept with the existing buildings. The implementation of individual elements was performed in such an organic manner with the entire space being very much customized. For experts, however, this is a clear reflection of the success of this project achieved by Cinema Designer, Anne Batisweiler.

Her motto is “I love a challenge” and the former Auditorium 1 of the Mathäser did present quite a few, and very specific ones at that. The requirement stipulated by Kinopolis right from the get-go, was to apply one’s own stamp on the premium concept, thus making for a special Germany debut. And, therefore, this Dolby Cinema features something very unique: its very own entrance area and foyer complete with separate concession counter and exclusive lounge, inviting patrons to linger before and after the movie.

“Even if it is always an outstanding auditorium, really it is just one of many amongst other cinemas“, according to Anne Batisweiler, “which is why the Mathäser also distinguishes itself in this regard”. For her, however, this involved an additional challenge. After all, the foyer had to harmonize with this Dolby Cinema flagship: the „audiovisual pathway“, an entrance tunnel, in which just the right images and sounds set the tone for a particular movie, already before entering the auditorium. The cinema expert describes this experience as follows: “It is really exciting for patrons to feel like they are part of the action; as they proceed to the auditorium, they are taken from their reality and immersed in the imaginary world of film”. She herself can remember her first visit to a Dolby Cinema very well, where she was “greeted” by a giant t-rex thrown up on a wall. “It was intense and simply amazing.” The extra-long hallway then follows the foyer in parallel and the actual auditorium only comes into view after the bend at the end – thus ensuring double the “wow” factor. 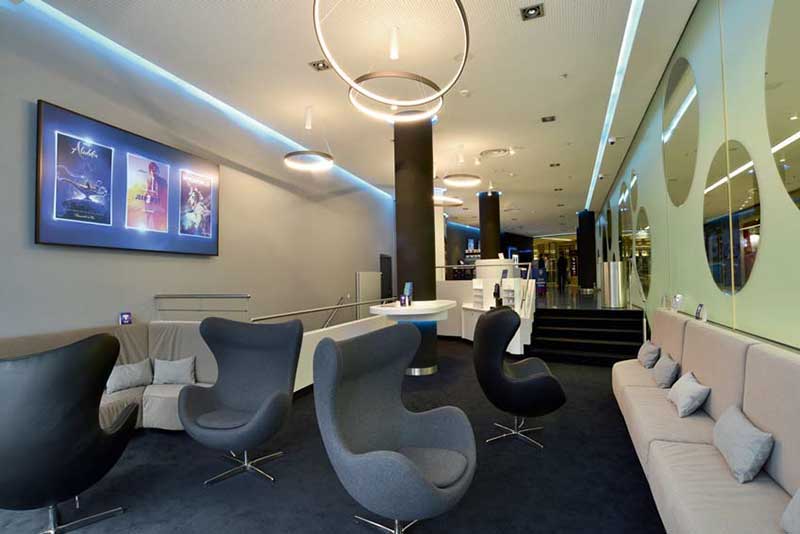 HANGING OUT
The exclusive lounge of the Dolby Cinema at the Mathäser.

The auditorium initially follows a clear-cut line: black being dominant. Not just in terms of the black level of the screen projection, but also on the walls, the ceiling and the leather armchairs with adjustable backrest. The rationale behind that is that during the screening, viewers should be able to immerse themselves completely in the movie experience, without any distractions. This idea is basically “as old as cinema itself,” as Anne Batisweiler puts it. One of its major proponents was Bernd Eichinger, the German director, film producer and screenwriter. And yet, there is also a special feature, which has somewhat of a subliminal effect, and according to Anne Batisweiler conveys “a sense of vastness and grandeur”. Turquoise-blue strips of light extend across the walls, framing the screen at a frequency range of 478 nanometres exactly. This is no coincidence, of course, but based on neuroscientific research conducted by Dolby Laboratories on the effect of audiovisual impressions and intended to create quite a magical atmosphere.

“As if you are looking into infinity.”

In Anne Batisweiler’s words: “When you look at the screen surrounded by shimmering light, it’s as if you were looking from the bridge of a space ship into infinity.” In what is already anything but a small space, this adds an additional sense of largesse. And yet it was exactly what is invisible to patrons that presented this architect and her team with one of their greatest challenges in this project: a total of 116 studio-quality speakers for the Dolby Atmos installation which cannot be seen. Of course, they are not located behind the screen, but they are also not to be found on walls or ceiling. Instead, each disappears in a so-called “cocoon”, further highlighting the magical mystery of this audiovisual spectacle. Anne Batisweiler explains that “in order to realize this concept on the ceiling, a portion of the acoustic building structure had to be opened and an additional substructure had to be mounted, to contain the speakers as well as the cocoons.” “I have been doing cinemas for about 30 years now, but this was a complete first, even for me. Really, we were tasked to develop and implement something totally new.” A “very exciting” task, which does not compare to any other cinema, I have ever designed.”

Anne Batisweiler invested around eleven months into this project from first contact, through planning and completed implementation. She is, as she puts it, “especially proud” to have found ways to realize everything that distinguishes a Dolby Cinema – and more. “Like I always say: It will not work, does not work – and especially with a premium conversion like this one, everyone really has to feel that progress has been made, resulting in a completely new experience. Moviegoers want to experience an event which is significantly different from what they can have at home. This is about having an amazing experience – one which you can let yourself literally fall into.”

Is she satisfied with the result? “Seeing her ideas realized is the lifeblood of an interior designer. To have achieved the concepts on which the design of this auditorium was based, in the end, to feel, hear and see how design, sound and image mesh is truly an incredible experience.“ Although these words would make for a great ending, someone else must have the final say here. No worries, though, because as Anne Batisweiler says: “I have never seen patrons leave an auditorium as excited as this one.” Good call.